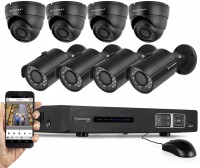 I’m the volunteer IT guy at church so they came to me when they wanted to install a camera surveillance system. I have a DIY system at home that works pretty well, but for church, I wanted something that “just works” and doesn’t require a geek to operate it.

I ordered the following:

A couple Saturdays ago, I met DaveK and LoganB at church to do the install. It’s not very complex. You just decide where you want the cameras, where you want the DVR, and then you run wires to connect them. I’d say about 90% of the project was just running cables around. Yes, there are wireless systems but wired is a lot more reliable at this point. Plus you don’t have to worry about powering a wireless cameras. The cables carry both video and power.

I was really impressed by the quality of the cameras. Those eight cameras give us good overage over most of the church and the entrances. Even with it cranked up to record all 8 cameras 24/7, we still get over two weeks of storage on the DVR.

We were done in about four hours, and by the end I was itching to upgrade to some better cameras at home because these cameras at church look so nice!