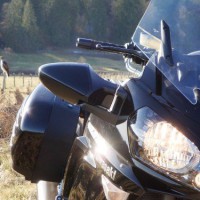 Almost exactly ten years ago, I bought my first motorcycle. Six years ago, I sold it and upgraded to the Kawasaki Concours. I loved both bikes and have a flood of good memories with them. I took Tyla for a motorcycle ride on our second date, I took a three day trip through Canada with Doug and Frank, and I saw countless beautiful sights.

As of Friday, those memories are all I have left of my motorcycle*. I sold it. The bike had been on consignment in Seattle for eight weeks but didn’t sell. After I got it back, I talked to a local Kawasaki dealer and found out they do consignment too. I should have just gone there first. After talking numbers, I decided to just sell it to them.

I told myself I couldn’t get a truck until a few things happened and one of them was selling the bike. Check.

Why sell it? I averaged about 3000 miles per year until Elijah was born but in the last two years, I’ve only managed 1000 miles total. Most of those were spent in traffic commuting to work. I just have other things to do with my free time these days.

I’d love to get another bike later in life once Elijah has other things to do with his free time, but for now, I’m going to enjoy this as one more simplification of my life.

*Not actually true. I still have to get rid of all my gear and a spare rear tire. Let me know if you’re interested.

I saw these posted on someone else’s site and had to share them here too:

There’s a popular motorcycle ride in this area called the Three Pass Blast. You combine Snoqualmie, Blewett and Stevens Passes for a beautiful ~240 mile ride through the mountains. I’ve done the ride quite a few times before but I decided to give it another shot in the 80 degree weather from last Saturday morning. I went counter clockwise around the loop with an 8:15AM start to try and avoid the various traffic congestion points and it worked really well. I was home by 12:30AM and still had the rest of the afternoon to work on house projects.

With two GoPro’s, I thought I could record the whole ride. The first camera battery died just after getting through Blewett pass, but when I pulled the second camera out of the saddle bag, I noticed that the bumping around had turned the camera on and drained some of the battery. That second battery died after getting through most of Stevens Pass. I still stitched the video together and ran it at 1000% normal speed. It’s not super exciting, but if you’ve never done the loop before, flip through the various points in the video and notice how dramatically the terrain changes over those 240 miles!

Approximately 3 hours after we signed up for a baby class, the annual Tulip Ride was scheduled on the same day. Thankfully we ended up taking a different class and Tyla was ok with me going on the ride without her this year.

This was my fifth time on the Tulip Ride. The first time I went it was about a dozen bikes. This year we topped 200 and raised over $5000 for charity before any company matching! There were police escorts both in Redmond and in Tulalip along with media coverage leading up to the event. It’s turned into a big production!

This was also the first year that we had some celebrities on the ride. Tricia Helfer and Katie Sackhoff of Battlestar Galactica fame were there riding some Harleys donated by Eastside Harley and taking pictures with a bunch of motorcycle riding geeks. And yes, I asked Tyla’s permission before taking a photo with Tricia.

On a sidenote, that’s probably the first time I’ve ever had my picture taken with a celebrity, at least that I can remember. It’s weird. I’m not sure I like it. “Hi, we both know I’m here just to take my photo with you and then we’ll never talk again. We both have jobs and yours just happens to put your face on TV, but we could argue about who’s job has a bigger impact on people’s lives. There’s nothing I can say that you haven’t heard a thousand times before and given the long line of people, you must just want to get this over with.” And then seeing the photo isn’t too encouraging either. Sometimes I look in the mirror and think I’m not that ugly. But then I look at the picture and it’s not hard to figure out who gets paid to look good for a living.

But back to the ride…

We started at Blazing Bagels in Redmond. Tyla and her family surprised me by showing up to watch us all leave. They weren’t alone as we drew quite a crowd of onlookers wherever we went. About 120 bikes left Redmond and we made our way up to Tulalip without staying in a super tight group. At Tulalip we picked up about another 80 bikes and then held the pack together for most of the way to the tulip fields before a car pulled into the middle of the pack and then let enough cars get in front of them that we completely lost touch with the pack. Thankfully between the four or five of us at the front of the second pack, we were able to remember the way to the tulip fields.

It started to rain near the end and since I’ve seen the majestic tulip fields many times before, I drove right past and headed home. It was a fun day but it I missed having Tyla along!

I geeked up a perfectly good motorcycle by putting two GoPros on the bike facing forward and backward. You can see the video on YouTube or embedded below. In most places it runs at 1000% of normal speed. I posted some of my photos to Flickr to share with the other riders.

I wonder if my son will want to go on one of these rides with me in the future?