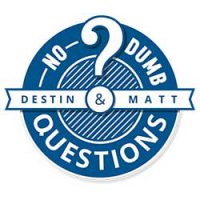 When you give a speech, you’re advised to think about the one or two things you really want people to takeaway from your presentation because they’re going to forget 90% of it. My guess is that parenting is somewhat similar so I spend quite a bit of time thinking about the most important traits that I’d like to instill in my son. One that I’ve been pondering lately is the ability to disagree with someone without getting angry at them. I’m always pleasantly amazed when I witness or participate in a discussion where people take opposite sides and walk away smiling. Every discussion doesn’t require a winner. Isn’t it enough to just exchange ideas? How many people have changed your mind by yelling at you? Why do we wall think it will work on other people?

That’s one reason why I enjoy the “No Dumb Questions” podcast. I originally heard about it because one of the hosts is Destin from Smarter Every Day. I really enjoy Destin’s work but his co-host, Matt, is equally enjoyable. They’re not totally different humans, but they definitely disagree on a variety of topics and it’s extremely enjoyable to hear them hash out the different sides of a topic while remaining amicable throughout. I learn so much more than when two people are screaming at each other.

Matt recently wrote a good post for the Christian Post entitled Why Are We Suddenly So Bad at Disagreeing? and it’s a good read. You can guess some of the points but he makes a couple others that I had never considered.

I won’t spoil his fun and summarize his article, but give it a read if you’ve thought about that topic before too and also consider giving a couple episodes of No Dumb Questions a listen. If you have to pick one, give episode 29 a listen. They gave into requests to discuss gun control. I don’t know that I fully agree with either one of them but it was really enjoyable to listen to them have a rational, friendly discussion on a topic that seems instantly explosive.

People around here can’t get enough of paying taxes so our property taxes keep going up and up. I knew that much, but when I was recently asked how much property tax I was paying, I didn’t know. My property tax is rolled into my mortgage and the mortgage company pays it out of escrow. It felt hypocritical that I say “Everyone should look at how much tax they are paying when they file their taxes” but at the same time, I don’t know the amount of another huge chunk of taxes. Thankfully it’s easy to look it up.

There are plenty of websites that help you do this, but for King County, go to the department of assessments page and you get a lot of great info all in one spot.

I’m glad I looked it up because I still had a number closer to what it was when we bought the house stuck in my head. I think a lot of the increase that people see is because of the astronomical rise in real estate prices, but the continuous flood of approvals for tax increases doesn’t help either.

I hope you got a chance to watch the Falcon Heavy test launch by SpaceX earlier this week either live or afterwards. If you didn’t, grab your popcorn and fire up this video. I watched it live at work and it was quite a thrill to watch the biggest rocket since the Saturn project lift off and then see the two boosters land simultaneously back on earth. Unfortunately the main booster didn’t land successfully back on the floating platform (not in the video), but two out of three isn’t bad. Since this was a simple test flight, Elon loaded his personal Tesla Roadster into the rocket for weight (generally companies just use heavy chunks of metal, etc) and there was a subsequent live stream of the car floating through the solar system.

I love the videos about the science behind games at the fair, but Mark Rober’s video was the first time I’d seen the same formula applied to an arcade. it taught me something about the rainbow circle game that will change my life forever.

And everyone’s favorite woodworking geek, Matthias Wandel, posted a video showing how you can use a free app on your phone or tablet to measure the RPM of your shop tools.

I started watching William Osman earlier this year. He’s a maker who created his own laser cutter (The Retina Smelter 9000) and has a very comedic style while producing some interesting creations and wearing crazy cat shirts. In a sad twist of events, his house burned down in the California fires. He has documented some of that process on his channel. His most recent video was probably the last one that was filmed before his house burned down and it’s a gem.

Evan and Katelyn are a husband and wife team that make stuff with a lot of different mediums. They are fun to watch and produce projects that aren’t so complex that you have to devote a month to make something similar.

And the last one isn’t a YouTube video. It’s a podcast episode. It’s probably the best explanation I’ve ever heard of blockchain (the tech behind Bitcoin, etc) and how the basic idea could impact your life in ways far beyond weird investments. They intentionally structured the episode to be approachable regardless of your comfort level with technology. Whenever someone has questions about blockchain or BitCoin, this is the single place that I will point them to: https://after-on.com/episodes/017

Dude Perfect’s first “All Sports Golf Battle” video was one of their best. They play a hole of golf but the catch is that their golf bags are full of random balls and sticks from various sports. They can only use each type of equipment for one shot. Hilarity ensues. The second time around was just as funny as the first!

Jimmy DIresta is finally starting on his upstate NY dream shop. He hired Kyle from Rural Rennovators (@rrbuildings) to do the work and Kyle created a 15 episode video series about the build. It’s really neat to watch a professional frame and roof something this big in just a couple weeks. I’ll embed the first video below, but you can watch the whole playlist on YouTube.

With the new Star Wars movie coming out, lots of people have Star Wars fever. Nobody does it like Colin Furze though. He built a FULL SIZE tie fighter! If you like this, check out the video explaining how he built it.