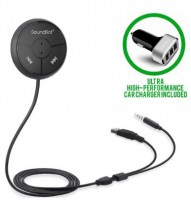 Now that I’ve caught up with the times and realized that Bluetooth actually works, I decided to finally add Bluetooth to my car. It’s easy to get jealous riding in our new Escape that Tyla drives most of the time. While I did add a nav system to my Subaru, it was a unit from 2006 so there wasn’t much to it.

For $18, the SoundBot seemed like an easy device to test out, and so far, I’ve been very impressed with it. It gets power from the cigarette jack and then connects to the auxiliary input on my head unit. Now I just get in my car, it pairs automatically. The SoundBot is sticky mounted to my dash and I can use the play/pause, forward, and backward buttons to control basic playback. I’ve spent so many years taking my phone out of my pocket and plugging in an audio cable. This feels luxurious!

If you have an older car, I think you’ll be happy with this device, and hey, if not, you’re only out $20. It’s not a major life commitment.