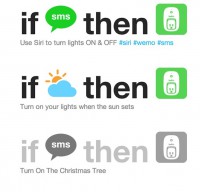 There are a LOT of ways to automate your home. In addition to all the products that have hit the market recently, there are some well-established systems that have been around for a decade or more. If you’re an expert, this post will make you cringe, but with all those caveats, here is one way to automate lights in your house.

I’ve installed some Wemo switches around the house. The next thing I wanted was to have the lights turn on and off on a schedule but be sufficiently randomized that you couldn’t sit outside with a watch and predict when the lights were going to turn on. Since we all watched Home Alone, we all know that’s how burglars operate.

WeMo publishes and SDK for Android and iPhone but none for just a standard Windows application. I really wanted to be able to control this with code that runs on my server. So instead of hacking the network traffic and trying to send the signals that the switches expected, I did it simpler (and probably uglier.)

WeMo switches can interact with IFTTT. The “If This Then That” site does just what it says: if something happens then do something else. They call each one of those pairs a “recipe.” I connected my light switches to my IFTTT account and then set up some recipes so that if I send an email to IFTTT with specific hashtags I can turn the various light switches on and off. Then I wrote an app that sends those emails at random times within a fixed schedule. It has been running for a while and it works great!

It’s nice to walk into the house when it’s dark and already have lights on at the appropriate times, and since we have LED bulbs all over the place, it costs almost nothing to have these extra lights on.