I imagine that there will be lots of times that I disappoint my son. Saturday was a huge one.

Some years, the AMA Supercross tour comes through Seattle and I’ve always wanted to go see a race. They convert Century Link field into a big dirt track and go nuts. Three years old seemed like a bit of a stretch, but I figured that Elijah and I would give it a shot. Practice started at 1pm so the plan was to buy the cheapest seats we could get, go early, and leave before the crowd got huge and raucous.

I hyped this with Elijah for weeks leading up to it. We were both incredibly excited about our planned day together while Tyla got a day to herself. On Saturday morning, I told Elijah that our day was going to be even MORE fun because we were going to ride a bus to get to the stadium. That might have trumped the motorcycles in his book. I thought I was so clever with this plan. 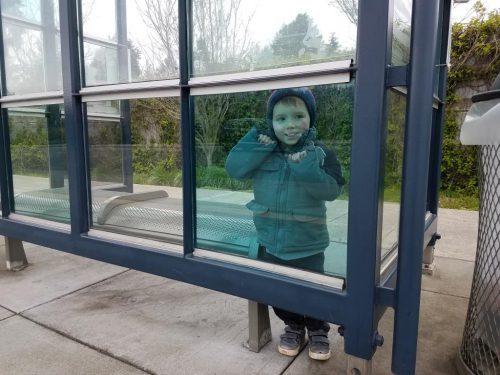 So we parked the truck at the Mercer Island Park and Ride. I bought my bus ticket on my phone app and we waited for the bus. It showed up and we hopped on. “Umm sir, that’s a Metro ticket.” “Yeah?” “This is Sound Transit. Different ticket.” …. I only had twenties in my wallet and the machine didn’t give change. “Oh. I’ll get off.” No problem though, right? I’ll download the Sound Transit app and buy a ticket. We’ll just get on the next bus in 15 minutes. But oops, Sound Transit doesn’t HAVE an app. There are a few bus stops with kiosks where you can buy a ticket. I was fed up with the fact that we have TWO bus systems and that I couldn’t buy a ticket for the one I wanted to ride, so we gave up on that and drove to the stadium. Elijah was disappointed but we talked about making the best of the situation.

It was a short drive to the stadium but whoa, parking was $50! Private lots a little bit farther down the road were $40. I kept driving. The normal area where we park for Mariners games had a $20 option. Ok. Fine. Whatever. We paid our money and I hoisted Elijah up on my shoulders for the one mile walk (seriously, I measured it and Google maps said 5279ft.) to the stadium. Elijah was getting pretty antsy by this time, but hey, we’re here. Time for the big payoff.

Wait… why is the stadium so empty? Why is there still earth moving equipment on the track? Shouldn’t they be practicing by now? I asked one of the stadium workers and … too much rain. Everything has been delayed until 4pm. It was 12:30pm. 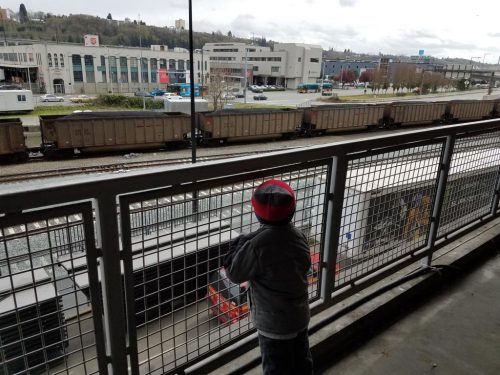 Elijah had no clue and was still grinning and excited. So we walked over to the outside edge of the stadium while we watched the trains go by and I thought about what to do. In the end, I decided to just call it quits. There’s no way we could sit around for 3.5 hours with nothing to do in the cold and misty rain. I knelt down and told Elijah that the motorcycles weren’t running today.

Elijah has a few different cries. There’s the “I don’t feel good” cry and the “I’m not getting my way cry.” But the one that gets to me is the “This is really sad” cry. His lower lip starts to quiver and tears well up. It’s such a pure, innocent emotion. That’s the one I got.

We wiped off his tears and took a picture by the track before heading back to the truck and leaving. Disappointing Elijah so badly (twice in the span of an hour) hurt way more than the pile of money we wasted on the tickets and parking. 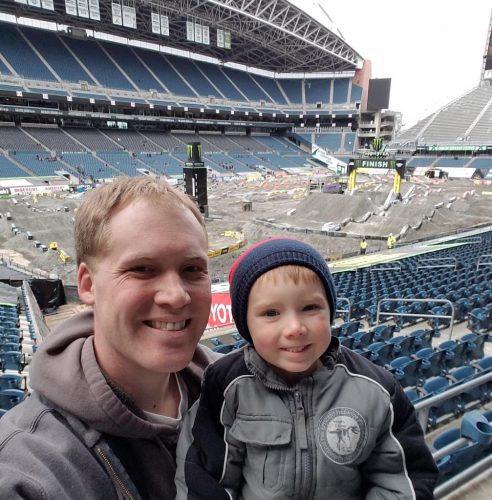 On the long walk back, I decided I would try to salvage the day by doing something else that might be a little special. I gave him three choices: go to an arcade, go to the McDonald’s play place, or go to church and mow the lawn. He chose… go to church and mow the lawn. That kid loves tractors! On the way there, we stopped at Dairy Queen for some ice cream and then he happily sat on my lap for over two hours while we bounced around the church yard.

I definitely feel burned by the whole experience. When I got home, I tried to figure out how I could have known about this before leaving the house. The best I came up with was that Century Link tweeted out a new schedule for the day about 30 minutes after we left the house. Not great, but it would have saved us a lot of grief.

Maybe in another year the sting will have worn off and I’ll be willing to try this adventure again with a four year old. 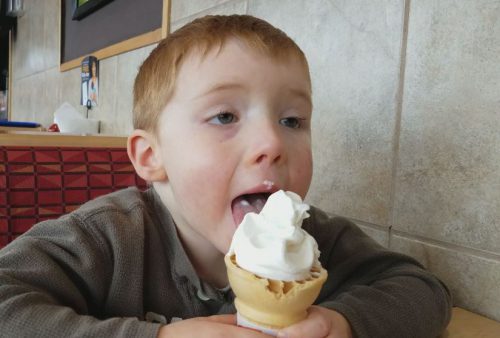 One thought on “AMA Supercross In Seattle”