Last fall we all went to see Caspar Babypants at the Neptune Theater in Seattle. Elijah has been to a lot of kiddie concerts but this was his first “real” concert where there was a ticket purchase and a theater, etc.

At the concert, we bought some artwork and had it signed by Chris Ballew (Caspar Babypants.) The artwork was done by his wife, Kate Endle.

It was pretty cool to get an autograph but I stupidly got it on the plastic covering for the photo. It’s kind of hard to display that. So the next time Tyla and Elijah went to see Caspar, they took Elijah’s concert ticket from the Neptune and asked him to sign that.

This simple project took me FOREVER but I finally got it framed and hung on the wall. I want to have a smaller frame for the ticket hanging separately from the artwork, but given how long this simple task took, I figured I should just get part way there.

Thanks to Chris and Kate for making great music and artwork! 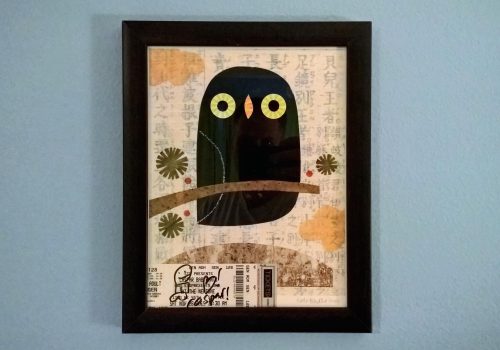 I don’t remember what prompted this, but I thought it would be fun to try and list off all the concerts that I’ve been to. I wouldn’t count myself as a frequent concert-goer, but this list is surprisingly long. Many of you have been to concerts and shows with me. Which ones did I miss? Where possible I’ve linked to blog posts about the events.

So I guess the natural question is: what are my favorites? Honestly, I really liked almost all of them. I’ll flip it around and choose the ones I wouldn’t do again. The Kenny Chesney concert was too loud, too many people, and too long. Matt Nathanson was … meh. I love his music but I didn’t love the concert. Maybe it was the venue. The Zane Lamprey and American Chopper shows were about as dumb as you’d expect them to be, but still entertaining enough. Jack Johnson was a fun experience but I’m too lame to do concerts at the Gorge, especially if I’m camping there afterwards.

There are lots of good memories in that list! I had forgotten about a lot of them until I really thought about it and tried to write them all down.

Colin Furze is blowing up YouTube. Almost literally. I recommend that you watch almost all of his videos, but here’s his most recent one. He made a giant fire tornado with fireworks on top to celebrate hitting 4 million subscribers to his channel. Tim, I expect something like this at your next Fourth of July party.

Matt Cremona is an accomplished woodworker, but he’s been spend the past months building a giant bandsaw mill in his back yard. This is a big step up from the chainsaw mill he used before. After cutting some “smaller” logs, he was finally able to load test it with a 53″ cut. The saw didn’t even bog down. If I still lived in Minneapolis I’d be excited to visit Matt and buy some wood from him. It’s probably not economical to drive from Seattle though.

As part of Elijah’s bedtime routine, he gets to watch a few minutes of YouTube. Originally it was usually something like a music video from Caspar Babypants but now he just asks for something and we pull it up. For the past few weeks he has been asking exclusively for Lego videos. That’s how we stumbled across a YouTube user called JANGBRiCKS. He’s a full time YouTuber and he spends his time working on his enormous Lego layout and reviewing new sets that come out. Most of the videos are too long for Elijah’s bedtime, but I’d be lying if I said I hadn’t continued watching them after finishing putting Elijah to sleep.

The year 2015 is over?! Crazy talk. It’s not so much that this year went fast, but that this century has been going fast. I still remember sitting in grade school thinking about what the 21st Century would be like and how far into the future that seemed.

I started this year with a clear idea of what I wanted my end-of-year post to be about: simplification. I had too much going on in my life already and with a toddler running around the house, it was just too much to deal with. So I set out to simplify my life. Here’s a list of some of the things I did to try and achieve that goal:

Some of those bullet points are obviously bigger than other ones, but sometimes it’s the little changes that can help the most because those little ones can nag you every single day. All of these have added up to a life that I feel is a lot simpler and more manageable. I’m sure it will fill up again, but at least I’ve got a good baseline set so I can work my way back to something like this in the future.

Enough about me! What did we do as a family?

As I mentioned above, my goal for the year was to simplify my life and get more enjoyment from fewer things. I call that a success but it’s not something that will ever be finished. Fatherhood continues to take lots of twists and turns as I try to stay one step ahead of my little man and in sync with Tyla.

We never know what the next year will bring but I feel like I’m heading into it feeling pretty organized. We’ll see if that’s still true in 366 days when the next year in review post goes up. Have a happy leap year!

Elijah loves music. He especially likes to listen to it in the car and when each song ends, he immediately makes the sign for “more.” Finding kids music that doesn’t make my head explode is a challenge, but we’ve locked onto a couple good singers so far.

What else is out there? What albums do you fire up when your kids want music? I’m especially looking for ones that adults don’t mind!